The city of El Dorado is marking the 150th anniversary of Eldorado’s incorporation as a city of the third class on September 12, 1871.

As part of this year-long event, Everyday El Dorado will be turning back the clock of time on a hunt for history through a podcast series with host Deanna Bonn and co-host Suzanne Walenta. Walenta is the Curator of the Butler County Historical Society Home of the Kansas Oil Museum.

The series “Celebrating 150 Years in El Dorado” will air on KBTL 88.1 The Grizz each Wednesday at 12 p.m. beginning on September 9, 2020, and is produced through a partnership with Everyday El Dorado, the Butler County Historical Society Home of the Kansas Oil Museum, KBTL 88.1 and series sponsor Linda Baines, Realtor with SunGroup Real Estate and Appraisals.

While September 12th is the day officially recognized as El Dorado’s founding, and will be observed by businesses, organizations and events throughout the year-long celebration, it was not the first time the town was incorporated.

El Dorado was first incorporated as Eldorado Town Company on February 6, 1858 under an act by the Governor and Legislative Assembly of the Territory of Kansas.

Eldorado was incorporated, again, on February 25, 1868 under an act of the State of Kansas then revised and amended to be a city third class on March 2, 1871.  However, due to the failure of election for officers, the election was officially held on September 12, 1871 and this has become the date now recognized.

The City of El Dorado was eventually incorporated as a city of the second class on July 15, 1885.

Settled and founded through the struggle to establish Kansas as a Free State, El Dorado has a rich history that has been buried and lost to the passage of time.

The ongoing series will unearth those forgotten stories and revive the ghosts of El Dorado and Eldorado’s past.

Botanica Wichita was host to the Suburban Garden Club and Daughters of the American Revolution (DAR) Susannah French Putney Chapter as they dedicated a Gold Star Memorial Byway Marker on Thursday, September 9, 2021.

The marker is the first to be placed in Kansas and honors those families who have experienced any military loss through active duty service in the United States Armed Forces.

Dignitaries including Dr. Brandon Whipple, Mayor of the City of WIchita, and Col. Nate Vogel, Commander of the 22nd Air Refueling Wing, McConnell Air Force Base, joined Gold Star families for the dedication and remembrance ceremony.

Presentation of Colors was made by Boy Scouts of America Troop #420 with the National Anthem performed by Jen Gardner.  The dedication of the marker was made by Maxine Wells, President of the Kansas Associated Garden Clubs.

“As we remember today, we dedicate this Gold Star Families Memorial Marker to honor all our Armed Forces of America families whose loved one made the ultimate sacrifice defending the United States of America,” said Wells.

“These families are committed to educating others on how to respond properly when meeting someone who has lost a loved one in service to our country,” said Gaines.

“I think it’s great that they remember our sons and the sacrifices they [made] for our country,” said Funcheon. “We miss them everyday.”

“To have him remembered and honored is a blessing for us,” said Funcheon.

“It’s a beautiful place to put the marker and hopefully there will be questions like ‘What’s a Gold Star Family’ and they will find out,” said Funcheon.

“He’s the reason I am here,” said Norgren. “Being able to remember him with the By-Way Marker has a special meaning for me.”

“I want people to talk to me about Chris and ask me questions about him,” said Norgren.

“Their loved ones made the ultimate sacrifice for our country in the Armed Forces,” said Gaines.  “And their mission is to offer hope, healing and honor through remembering their fallen heroes.”

“It’s an honor to have [the marker] here in Wichita, at Botanica Garden which is a beautiful location,” said Whipple.   “I understand it has been years in the making and to have it here, at a time when we are reflecting on 9/11, is great timing for this event.”

The ceremony concluded with the playing of Taps by John Noonan and Bruce Haseltine.

In February 2021, nearly 1,000 young women from across the country made history as the first group of females to be awarded the distinction of Eagle Scout.

With a transition of the business model over the past few years and the introduction of girls and young women to the program, the Boy Scouts of America now refer to their troops as  Scouts.  At the local level, girls were introduced three years ago to Troop 222 in El Dorado.

Scout Troop 222 is a part of the Quivira Council based in Wichita and has been sponsored by First United Methodist Church since the Troop was first chartered in 1932.  The international program boasts scouts in almost every country in the world, according to Troop Leader Frank Williams.

Williams spoke to the Rotary Club of El Dorado on Wednesday, September 1st and provided an overview of the program.

“We’re always looking for opportunities with the youth,” said WIlliams. “In the next few years eight Scouts will be looking for Eagle projects,” he said. “There are currently five girls in the Troop and we want to diversify and get more girls involved,” said Williams.

The Butler County Chapter of Delta Waterfowl held their second annual banquet in El Dorado, Kansas, on August 28, 2021. The evening included a steak dinner with the meat prepared by the Red Devil Chefs and side dishes and desserts provided by local catering companies.

A live auction was the main event of the evening and was called by Sundgren Auctioneer Rick Remsberg.  Additionally, a silent auction and raffle drawings were held throughout the night for both adults and children.

The Butler County Chapter Chairman, Chad Dawson, said the banquet is the largest fundraiser of the year for the local organization.

“The thing that really drew me to Delta Waterfowl is the community impact,” said Dawson.  “The Butler County chapter keeps 15% of all the money raised to spend locally on programmatic work,” said Dawson.

Those programs include youth education and mentorship programs, family hunting events, and a veterans hunt known as “Hunt for Heroes.”

Dawson was presented with the “Local Chapter Volunteer of the Year” award by Garrett Trentham. Trentham is the Missouri/Kansas Regional Director for Delta Waterfowl.

Delta Waterfowl is a national, non-profit organization with a mission “To produce ducks and secure the future of waterfowl hunting.” 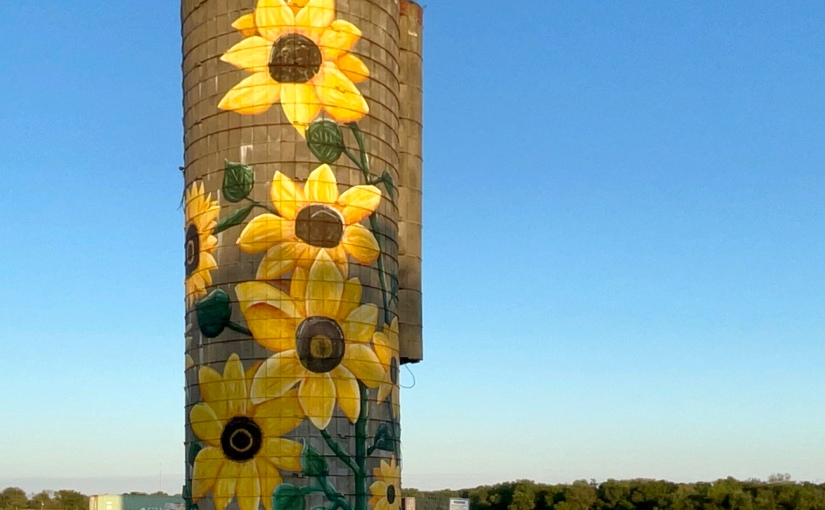 It’s sunflower season and thanks to Diana Burress and her husband Walter, who plants these beautiful flowers each year and opens their field to the public for free, many family photos and senior portraits will be taken during the 10 day window that the flowers are in bloom.

But this year sunflower lovers have a new photo backdrop to enjoy. Last year the Burress’ decided to hire someone to paint an old forty foot silo on their property.

“My husband wanted to see sunflowers from the front porch of our house so he put out a call for painters. While we had many people interested in the project, they wanted to charge a lot of money,” said Burress.

Burress began painting the silo as soon as sunflower season was over last year and it took her from mid September until the end of October to complete.

“My kids call me the crazy sunflower lady,” said Burress. “I love sunflowers. They are my favorite flower and it is also the state flower,” said Burress, a Realtor located in Augusta, Kansas.

“Over 15 years ago my husband planted a few sunflowers around the house for me to enjoy and I would invite my clients and their families to come and take pictures. “

“After a few years, he started planting out in this field and more people started coming, just by word-of-mouth,” she said.

Burress keeps her clients and the public informed when the field is in bloom through her Facebook page “Diana Burress – B Realty Realtor/Broker.”

“They are almost ready,” said Burress. “I think by [Labor Day Weekend] the field should be in bloom.”

The sunflower field, located Southwest of Augusta off of Thunder Road and 115th Terrace, is free and open to the public.

“This year we have a couple of different things going on as well,” said Burress. “ We will have signs with QR codes that will link you to my site so you can post your pictures on there. We love to share the pictures so we encourage people to do that.”

“We also have a QR that will link you to the Marketplace 67010,” she said. “I have some memorabilia there. Some t-shirts, postcards, and sunflower seeds for birds will be for sale.”

“Last year Walter planted 143 acres of sunflowers,” said Burress. “They are the black oil sunflower seeds for bird feed. The seeds will also be available at Schneider Feed, Lawn & Supply.”

“We want everyone to come on out to the field next weekend,” she said. “We don’t charge people to come and take photos,” said Burress “it’s a goodwill gesture.”

For the first time since November 4, 2019, a Kansas Honor Flight (KHF) took veterans to Washington, D.C.

KHF #80 took 32 veterans from 20 different towns across the state.  Three Butler County residents were among those on the flight.

The Kansas Honor Flight is an all-volunteer organization that works to honor Kansas veterans of World War II, the Korean War, and the Vietnam War by providing them with an all expense paid journey of honor, and remembrance, to visit their memorials in Washington, D.C.

The organization also works to educate the youth and communities throughout Kansas about the impact of these historic wars and the freedoms our nation enjoys because of the service of our veterans.  KHF is part of the National Honor Flight Network.